Form 2555: How to exclude foreign income on your taxes

Form 2555 is one of the tax forms you’ll want to get familiar with if you’re an American working and living overseas. It’s the form that lets you claim the Foreign Earned Income Exclusion, which (if you qualify for it) can save you a lot of headaches and a lot of money come tax season. Below, we’ll dive into the basics of Form 2555, including why it exists, who files it, and a quick run-through of how to do it.

Between all the different acronyms and form numbers, taxes as an expat can be confusing—that’s why we’re here to guide you through the process! Taxes are tricky and filing the wrong form can lead to all sorts of trouble. Start with H&R Block today and we’ll make sure your taxes are done right. No matter where in the world you are, we’ve got a tax solution for you — whether you want to DIY your expat taxes or file with help from an advisor. 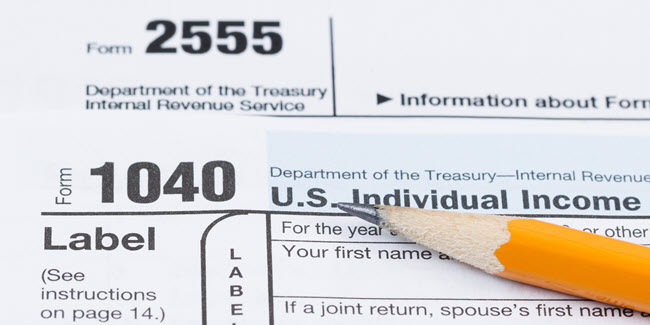 Most countries implement some sort of tax on income earned within their borders. The U.S. is the same way. What’s different about the U.S., though, is that the U.S. taxes income based on citizenship and residency—meaning you still have to pay taxes on income you earned abroad.

To help protect Americans earning income abroad from being double-taxed (once by the U.S. and once by the country in which they earned the income), the U.S. government created foreign tax credits, deductions, and exclusions expats can claim. One of these ways is allowing certain American expats to claim the foreign earned income exclusion. Tax form 2555 is the form you use to figure out and claim the foreign earned income exclusion and housing exclusion or deduction.

If you’re unsure if you should file Form 2555 to claim the foreign income exclusion or Form 1116 to claim the foreign tax credit, let us help. No matter where in the world you are, we’ve got a tax solution for you—whether you want to DIY your expat taxes or file with help from an advisor.

You need to file IRS form 2555 if you want to claim the foreign earned income exclusion. You can claim an exclusion for income you earned abroad if you qualify under the bona fide residence test or the physical presence test and if you have a foreign tax home.

Your Form 2555 instructions can be found on the IRS’ website, but because making a mistake can cost you (literally), we recommend you leave it to a seasoned tax pro to do all this work for you.

Taxes aren’t simple, and that’s why we at H&R Block work round the clock to do them for you. Whether you file expat taxes yourself with our online DIY expat tax service designed specifically for U.S. citizens abroad or file with an advisor, H&R Block is here to help. Start your expat taxes today!

Who must file an FBAR?

If you hold or control the distribution of a foreign account, you may need to submit FBAR tax forms. Learn more about how to file an FBAR at H&R Block.

Find out why you may need to file an IRS form 8938. The experts at H&R Block will help you file your Expat taxes with ease.

What is a nonresident alien?

Find out the definition of a non-resident alien and see how it may affect your tax filing status.